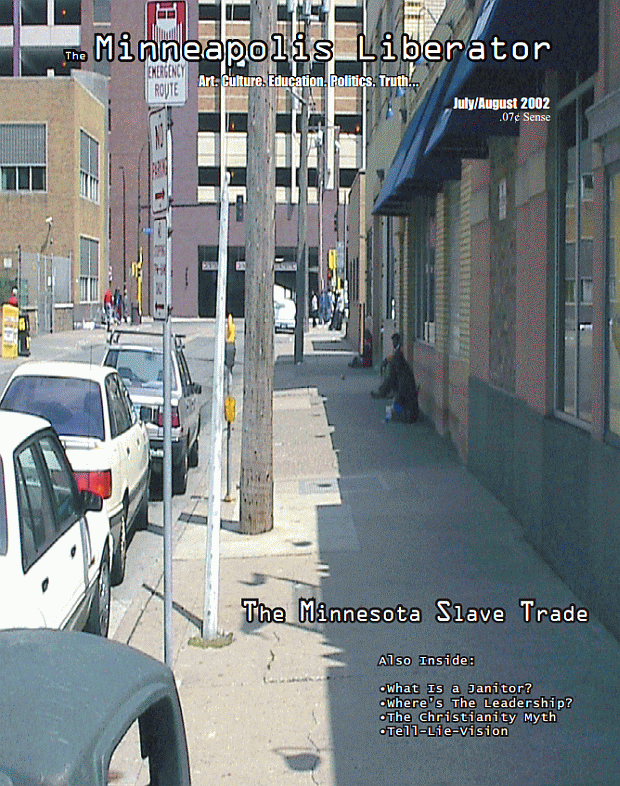 One of our Angela Davis posts (and this post from The Atlantic about Minneapolis' White Lie which notes a key 2002 reneging of a celebrated 1970s liberal property tax policy) made me want to revisit this story from our first print release, called The Minnesota Slave Trade. It could easily be called the "neo-slavery trade" only not based on the prison industrial complex (as Kanye West and others before him have said), rather what might be called the social services industrial complex. Others have even referred to a non-profit industrial complex. If a key part of the struggle is determining how we are being oppressed before we can determine how to successfully resist and revolve through sankofa, this article is a very good broad outline of where we are at in many urban areas, where social services have pacified the lower class with benefits and the middle class with good paying jobs and a pat on the back.

Over the last century, slavery has changed dramatically within the boundaries of North America. After the Emancipation Proclamation, slaves changed from being the property of a slave master, to being the property of a particular county. This form of ‘neo-slavery’ benefits a new population as well. The method of slavery that dealt primarily with the property of one family trading its labor for basic necessities such as food, clothing and shelter and living on a plantation has become nearly extinct—making way for this ‘New Method’. The new method of slavery deals primarily with the product of a particular county, which benefits the entire lower-middle and middle classes. This new ‘human product’ can be credited for the sudden boom of social service agencies in Hennepin County, as well as the stability of our current middle class.

Minnesota, the land of skyways, ‘Minnesota Nice’, and of course the social service agency, has for the last thirty years been involved in one of country’s largest slave trades, running neck-and-neck with the immigrant farm industry of Northern California, and the private prison systems of the South. Since the early 1970’s, Minnesota has stopped at nothing to ensure the livelihood of one of its fastest growing businesses—the social service industry. To ensure this growth, Minnesota partook in a “ghetto colony expansion” project.

The ‘ghetto colony expansion’ project worked through the exact same system it was intended to benefit. It started out by offering services, which gave rewards to welfare recipients. These services allowed for drastic temporary improvements in the lives of individuals on welfare, compared to the cities they were fleeing—in search of the “Minnesota Dream.” Minnesota recruited its “human product,” from other Midwest ‘ghetto colonies’ such as Gary, Chicago and Milwaukee. By offering, on average, at least $150 more in food stamps, better health benefits, programs such as Section 8, and better minimum wage jobs, Minnesota began to greet thousands of brand new “product slaves”. Many of the other colonies were already in the latter stages of this modern day slave process (which will be discussed later), so from the time this process began, our “product slave” population tripled; along with crime rates, the number of services being offered, and the number of people in need of these services. This situation can be easily observed by anyone who has lived in Minneapolis since the early 1970’s.

Today, the Project Ghetto Colony Expansion Project benefits the county in which the slaves live in several different ways. The first of which is an increase in the number of individuals who are in need of public services. By increasing demand, the amount of jobs that are available to those on the helping end, as well as the funding dollars or service capital that circulates through the city also increase. In addition, opportunities to create more agencies increase, which in turn, create more middle class jobs.

The second way in which this process benefits the county is by increasing the potential for crime. By increasing crime potential, new doors for crime prevention programs open up, as well as county jail systems. Opportunities for the distribution of narcotics also broaden, increasing the money that can be made by ‘ghetto colony’ businesses, such as liquor stores, check-cashing spots, fast food restaurants and corner stores. In addition, with crime rates growing so rapidly, job markets within the court systems increase, as well as law enforcement, juvenile and adult correction programs. And the list goes on.

However, the last way in which the county benefits from the G.C.E.P is through the system of Federal Funding. By establishing a population that is in need of services and programs, the amount of dollars the county can receive from the Federal government increases. However, this is only the beginning of this new slave industry. The true purpose behind this process is to produce actual slave labor. Once the county believes that it has reached a point where financial gain is burdened by efforts needed to control the “disagreeable human product,” they begin to move to stage two; this is our current stage.

The second stage is a process of relocation. In this stage, the product slave is relocated to a new ‘ghetto colony’ that is usually located in a surrounding suburb. This process is accomplished by moving housing services like Section 8 and public housing into the suburbs. In turn, the “human products” are forced to move into designated areas so that they can continue to receive benefits. We must keep in mind that from the beginning of this process it was the deliberate intent of the state to create these new suburban plantation/colonies. Once these ‘plantations’ are established we enter the cut back stage where benefits that many people came here for, begin to dwindle, leaving them isolated in a suburban colony and left to fend for themselves. For those of us that are in support of cutting welfare, this may seem to be a good thing, but many of these individuals have no resources to begin with, let alone enough to become providers for their families. It will resemble the period in time when the Emancipation Proclamation was signed. Many slaves refused to leave the plantation, fearing they would not have the means to acquire their necessities. In this new form of slavery, the slave will be afraid to abandon the system, for fear they will be unable to meet their basic needs.

Once these colonies are established and the welfare benefits are cut, thousands of African Americans will become isolated in areas with little or no means of survival. Due to ‘house-lessness’, black on black crime, malnutrition and poor health care the process of genocide will be magnanimous. Once the situation reaches a near peak, factories and other businesses that need cheap labor will begin to emerge. Due to the desperation of the recovering “human product,” wages that these factories and other businesses will be allowed to pay will be close to, or below minimum wage.

As we are moved into the final process of creating the modern day plantation, the relocation process will be complete and the factories will be built. The ‘human product’ will be controlled, as to not have negative effects on the city. Buses will leave the colony at 7:00 am for those needing to take care of business in the city, and will stop running from the city back to the plantations at 7:00pm... The police will not actually patrol the plantation itself, but will patrol the surrounding areas so that communities bordering the colonies will feel safe—knowing that their property is being protected. Once the new slave process is completed and the welfare benefits African Americans ran to the north for are entirely depleted, the ‘human product’ will be in a position where factory jobs become much more appealing. This will not have been an accidental process. The state will have known that while recruiting this population over the last 30 years, it would at the same time be cutting services, leaving the African American population in a submissive position regarding their survival needs. Now the question is… Can this process be stopped before we—as Black Minnesotans dependent on government assistance—are placed in complete economical bondage?