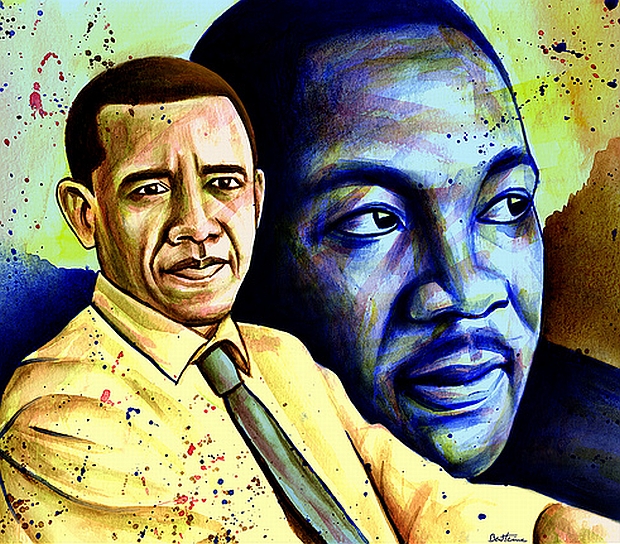 Is Obama the successor to Dr. King? Many have touted Obama as the next great exemplar of black activism and progressive thinking. His victory in the Iowa Caucus has asserted him as a force to be reckoned with, but we must ask—is he really cut from the same cloth as King?

No. Obama’s proposed policies contradict those of King. Although they both harbor desires to connect with people along the racial and economic divide, King never compromised his core values or the interests of his people. In 1967 at the Riverside Church in New York, King delivered his “Beyond Vietnam” speech, stating “it seemed as if there was a real promise of hope for the poor -- both black and white -- through the poverty program... Then came the buildup in Vietnam and I watched the program broken and eviscerated as if it were some idle political plaything of a society gone mad on war, and I knew that America would never invest the necessary funds or energies in rehabilitation of its poor so long as adventures like Vietnam continued to draw men and skills and money like some demonic destructive suction tube.” King was vilified by the establishment for this speech, which included President Lyndon Baines Johnson. Johnson accused King of throwing it in with the communists. Time magazine said the speech was “demagogic slander that sounded like a script from Radio Hanoi (Vietnam radio station)."

Today the Iraq War, in many ways has replaced the Vietnam War on our political agenda. This war, far from defending you and me, is an attempt to control precious resources throughout the Middle East and dictate policies to other nations through its stranglehold on resources. This war is, in all likelihood, a prelude to wars that could take place in Africa and Latin America as the US competes with other imperialist powers like China and the European Union. Where is Obama in this dangerous battle over power and lucre? Is he, like King, a man of conscience opposing the immorality of such wars? No, when asked if he would withdraw troops by 2013, the end of his first term, Obama made no such commitment. In fact, in 2007 he agreed to support surgical missile strikes in Iran, and the invasion of Pakistan, which would expand this immoral war.

The apparent breakthrough of having a black man as president could lull us into complacency on this war issue. In that same Riverside Church speech King called the US “the greatest purveyor of violence in the world,” having a black man continue that legacy certainly places him in direct opposition to King and firmly in the same category as Hillary Clinton, John Edwards and the other main stream candidates who do not oppose this war and future wars of aggression. The idea of Obama’s candidacy as the fulfillment of King’s “Dream” is not only inaccurate, but is an insult to King’s true legacy.