H. Rap Brown / Capitalist Cultural Nationalists Will Turn Blackness Into Nothing But a Cult 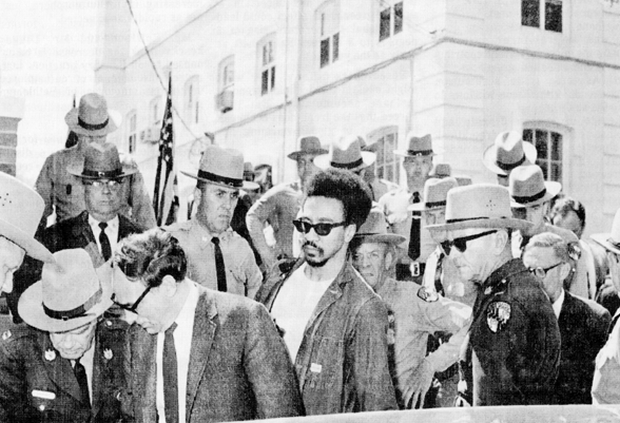 [BUMPED = 'Cause ElectricLadyLike said: "And I feel Imam Amin because it can't be without politics, because then the danger becomes: 'Well, I'm a Queen so I can have whatever I want 'by any means' and um... if I make it then that's a testament... when I make it, and I HOPE my people do too.' But when we talk about Nation-Building, knowing myself ain't enough. Its cute though. Finding that balance is painstaking but crucial... I'm literally on a personal quest to get to that point. Its hard though."

This, for me, expands on the conversation of Afrocentricity as fallacy.

[transcript begins here, listen to audio for complete speech] The whole movement is in danger of being co-opted by politicians of the white power structure [notice he doesn't say White Politicians]. They recognize that if they can get black people thinking culturally, they don't have to worry about them moving politically. If it can become sufficient to be "black and proud" then you don't have to worry about the oppression that whips black people.

To be black will become ego-gratifying.

In other words black people will form a cult, and they will be nothing else but black and proud and they will boogaloo to the concentration camps when the man chooses to send them there.

Now we find that the cultural movement tries to operate in a framework outside of the political movement. In other words, they seem themselves as an entity in themselves. They say the teatre is important and writing is important, poetry is important to black people cause we must know ourselves. I say black people have known all along that they were black. And in terms of what will make black people fight for survival, it will not be their identity. It will be oppression.

When the repressive laws are put on the book and black people can no longer move freely -- as free as they do now -- in this society, then this will make black people fight. This will make the oppressed people in this country fight. Repression. Not the type of identity that people chose to believe will lead black people to freedom.

Cause if they get black people to think in the lines of cultural nationalism, they don't have to worry about black people moving politically. In other words, if you can create a black capitalist then you don't have to worry about your system being jeopardized. And on the other hand, when people begin to move politically, they understand it is a system that we are fighting against and that system is capitalism itself.

And that political things must be done. It's true and it was necessary that black people evolved to a position where they recognized that they in themselves were worthy of freedom, which is granted to every man. In other words, you were born free and you have to exercise that right to be free. Black people were deprived of the very -- should we say the very -- thought, and think they should be granted free. So therefore, in terms of the limited type of liberation that came along with cultural nationalism in the sense of black awareness has served it's purpose.

If all of our energies were directed into the cultural phase of struggle, it could happen on the very day that every black person in this country grew a natural and decided that he was black. What's gonna prevent the man from coming into your house and taking you? What you gonna do whip him offa you with a dashiki?

You have to prepare yourself physically. And that is political. Culture without politics breeds economic and political liberalism, not revolution.

In other words, your quest is to become liberal in this country if you talk about culture without politics. As a matter of fact, culture has to be defined by politics... [transcript ends here, listen to audio for complete speech]