The "Otherness" Fetish / Toni Morrison's Playing In The Dark: Whiteness & The Literary Imagination 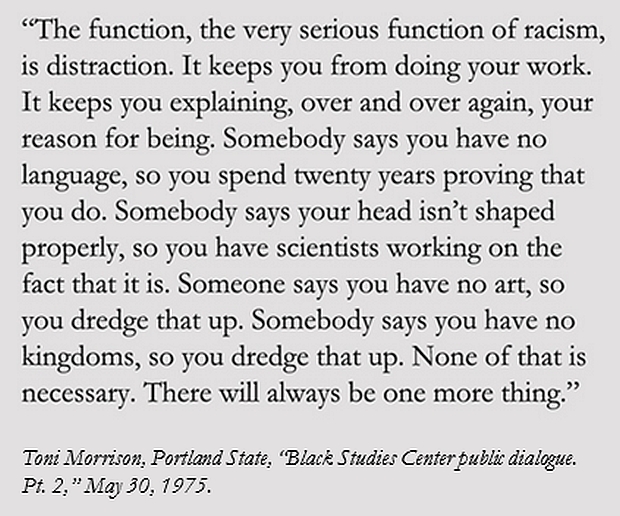 Ever since I've read Toni Morrison's Playing In The Dark (1992), I've sort of continued her mission -- albeit, much more lightheartedly -- cataloging the presence of "symbolic blackness" throughout (American) literature. In her book, she analyzes otherwise conveniently ignored coincidences of black characters showing up in white stories in order to vindicate a white character (not exclusively in the "magical negro" sense, but sometimes just to serve as a counterpoint to white morality, humanity, etc.)

For instance in Hemingway's "To Have and to Have Not" she points out how the author is forced to write an illogical blip into the plot so that the white protagonist (Harry Morgan) can illustrate competence, virility, freedom, bravery, and morality in contrast to a "nigger," who is mostly silent and unfree.


Morrison also sifts through works by Poe, Faulkner, Twain and others noting similar occurrences. She does so not to point fingers or protest "whiteness", but to highlight a new method for reading American literature all together.

I took a look back at some of the foreign literature I had read and realized that the same holds true for many of those books as well: blackness (or else, otherness) gets used to amplify the definitive characteristics of white characters. In Camus' "The Stranger," we can't grasp the radical nature of Meursault's indifference to murder if the victim isn't an annoying Arab.

English gentility isn't so admirable without the African savagery in Conrad's "Heart of Darkness".

In Clarice Lispector's "The Hour of the Star" Rodrigo S.M. can't define and meditate on his intellectual anxieties without painstaking observation and criticism of the "girl from the Northeast" (i.e., Bahia).


These books and countless others show the proclivity of white writers to use blackness/otherness as a kind of fetish. Whether the authors' characters are regarding blackness with awe or disdain, the notion that the "object" in question be black ultimately denotes a certain level of dedicated attachment to blackness. When read this way, a great number of books reveal themselves in new and interesting ways...