Sharifa Rhodes-Pitts & Baldwin's Nigger: "It is not a racial problem. It's a problem of whether or not you're willing to look at your life and be responsible for it, and then begin to change it ... White is not a color, it's a attitude" / James Baldwin and Dick Gregory {film} 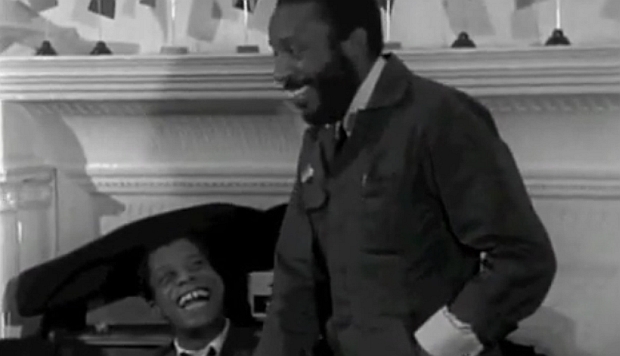 In the film "Baldwin's Nigger," (available free below) James Baldwin and Dick Gregory talk about the black experience in America and relate it to that of the Caribbean in Great Britain. Filmed at the West Indian Student Center of London in 1968 by Horace Ove, a British filmmaker, painter and writer and one of the leading black independent film-makers to emerge in Britain since the post-war period.

Before we get to that though I'd like to share a quick thought. In a recent interview with Tavis Smiley about her book "Harlem Is Nowhere", Sharifa Rhodes-Pitts discusses the essay by the modernist writer Ralph Ellison that inspired the title of her book:

"Harlem is the scene and symbol of the Negro's perpetual alienation in the land of his birth."
-Ralph Ellison, "Harlem Is Nowhere" 1948


Tavis also challenges her to respond to another quote in her book, this one from the great diplomat and civil rights leader James Weldon Johnson:

"The question naturally arises, 'Are the Negroes going to be able to hold Harlem?' If they have been steadily driven northward for the past hundred years and out of less desirable sections, can they hold this choice bit of Manhattan Island? It is hardly probable that Negroes will hold Harlem indefinitely, but when they are forced out it will not be for the same reasons that forced them out of former quarters in New York City. The situation is entirely different and without precedent. When colored people do leave Harlem, their homes, their churches, their investments and their businesses, it will be because the land has become so valuable they can no longer afford to live on it. But the date of another move northward is very far in the future."
-James Weldon Johnson, 1925


When Tavis asks her, "is there hope for Harlem," she places it in the possession of those in Harlem who "hold the memory of this place and the power of what it's meant for so many generations." Unfortunately, Tavis never gets her into discussing the role that the black upper-middle class is playing in stealing back Harlem now that "the land has become so valuable [the black lower class] can no longer afford to live on it." The failure to address that question in a nationally televised discussion on Harlem in 2011 is super sad, especially in light of other conversations on blackness and class divides in the Obama era. I'm also reminded of the movie trailer for the documentary "The Atlanta Way," a film that proposes to analyze the gentrification of Atlanta. In interviews with black developers, their opaque statements on "development" seem purposefully unclear in order to please any listener, and they never face the question of displacement straight up. Unfortunately, there too, at least in the trailer, white skinned folks are the only ones portrayed as gentrifiers, while the black developers' comments seem to be placed on the same side -- in intention -- as the black residents of the government project housing complexes whose complaints center mainly around not being "given" enough to motivate them to want to care for their community. While the idea of black folk in the projects expecting to be given anything is problematic, the question remains, whose side are these black developers on? Without the type of prescience of a James Weldon Johnson -- or, as we'll see below, a James Baldwin -- it's hard to answer that question.

And perhaps that is ultimately why Sharifa Rhodes-Pitts is unable (yet?) to answer these questions coherently -- she's still very young for a writer getting so much attention, and maybe is still setting her feet into memory. Here's how The New York Times, which by no means do I look to for instruction, described her book:

/////"It reads, in fact, as if Ms. Rhodes-Pitts had taken W. E. B. Du Bois’s “Souls of Black Folk” and Maya Angelou’s “I Know Why the Caged Bird Sings” and spliced them together and remixed them, adding bass, Auto-Tuned vocals, acoustic breaks, samples (street sounds, newsreel snippets, her own whispered confessions) and had rapped over the whole flickering collage. It makes a startling and alive sound, one you cock your head at an angle to hear. At the end you may decide, as I did, that this ambitious racket is somewhat hollow: the book never coheres or locates its own beating heart. But Ms. Rhodes-Pitts’s is a voice you’ll want to hear again, to recapture the scratchy buzz she’s put into your head."/////


Unfortunately, as we discussed here with the film "Night Catches Us" the children of the crack generation have an unfair burden placed on them so that when they speak, regardless of their status as a post-apocalyptic generation, they are looked to as if they inherited an uninterrupted, multi-generational continuum of black thought and experience, when in fact that is just no longer true.

Sure every generation of black folk has endured its share of struggle in and since slavery, but in many ways we are again in a reconstruction period in America, with crack cocaine being such a nuclear-like experience for the black family and community that it could be looked at as a condensed sequel to the slavery "event." We could also tangent this conversation into examples of continuum longer than the black American up until crack, but the only point I'm making by evoking that concept is to illustrate that a thing such as a multi-generational continuum exists and that crack was a massive interruption unlike any black folks had seen since slavery.

The thing I find most interesting about apocalyptic events is the varying choices that are made by those who experience them, something Cedric Robinson has already traced from the colonial period to the civil rights era. For us though, crack is in many ways the end-cap on a series of continuously linked, post-slavery intergenerational resistance, from the Harlem renaissance, civil rights movement, black power movement, black arts movement, to the Black Panther Party movement -- a legacy demonstrating incredible intergenerational stamina. Equally condensed temporally -- fast causes generate fast effects -- hip-hop blossoms and becomes the new blues, new soul and new rock. Up until then, black (aka American) music had been mainly a continuous evolution from the spirituals and the blues, with hip-hop it's sort of reborn and, while still present, the memory is distant in scratches, remixes and samples. The New York Times perspective is only worth something to me because it interestingly evokes that remixing practice to describe the style of Rhodes-Pitts; the way we chose to use technology to rebel (shout out to Waxpoetics mag for featuring Juan Atkins recently) and bring our distant memory of our past into the future -- sampling wasn't big in hip-hop in the late 70s and early 80s, but it got huge in the heart of the crack era (late 80s and early 90s). But as we've seen in the early 2000s, sampling can only go so far toward keeping memory alive, bloggers have popularized an entire sub-movement to retrieve the original songs that hip-hop artists take samples from to create their albums. People have decided, often against the behest of producers not wanting to reveal their magic, that they need to hear more than just the sample to really know.

As historian Donna Murch pointed out at a recent "Night Catches Us" screening at Harlem's Maysles storefront theatre, the Black Panthers were such a perfect reflection of the black community that they were the epitome of inheritors of the torch of black struggle, demonstrating what could be done with such a rich intellectual and political inheritance, and their destruction serving as a micro example of the destruction of black community when the crack event occurred and a more or less continuous chain was bombed into the fucking ground (like me, Murch is extremely interested in Dark Alliance, the compiled work of the late, great journalist Gary Webb investigating the weaponization of crack cocaine and ties to the Iran-Contra scandal during the Reagan presidency).

Therefore, because our art is in many ways relatively elementary, our stories often lack the long view that we noted links Ayi Kwei Armah and Lauryn Hill. I think what Leonardo da Vinci was saying when he said, "simplicity is the ultimate sophistication" was that when you sense clearly and see clearly, especially temporally, you realize your responsibility to speak clearly. That's why I think Michael Jackson obsessed over a pose and why Armah advises one to be conscious of the delicate process of awakening. Malcolm X called it, "making it plain." The photographer Jamel Shabazz's work is revolutionary in it's clear, simple premise -- help us remember what we looked like in "A Time Before Crack".

Our elementary position as a post-apocalyptic generation sometimes pressures us to speak before we're prepared to speak simply. Though an excellent worker, perhaps Sharifa Rhodes-Pitts, like Tanya Hamilton and many of us, is simply not yet ready to be prescient and we should accept that. Like the conclusions reached with "Night Catches Us," it leaves us open to accepting both the beauty and limitations of the work and worker, while clear about what the essence of next evolution should contain. And really, if we contemplate it seriously across time and space, it's just essences that we're concerned about -- memory helps us maintain them (better). But perhaps Lauryn Hill's crucifixion for abandoning "the game" makes more sense when we see it in that light. Only the most exceptional arise from an apocalypse with a long memory in tact and immediately accessible, or even the desire to restore a long memory plagued by amnesia. For those of us, like Rhodes, who are brave enough to try, the increased value of the pre-crack philosophers of black thought is revealed once again. If Rhodes-Pitts, who I give props to, gives us a valuable but foggy, remixed vision of those who "hold the memory" of Harlem through the eyes of a transplanted, not-yet-prescient writer, here James Baldwin gives us sophisticated simplicity, as a member of a generation that more easily inherited an uninterrupted continuum of black thought and experience.


Also on liberatormag.com: 1) The dilemma of the metaphorical mulatto / White privilege; 2) Blacks Heading South, Leaving The City; 3) If BET were to design a city it would be Atlanta