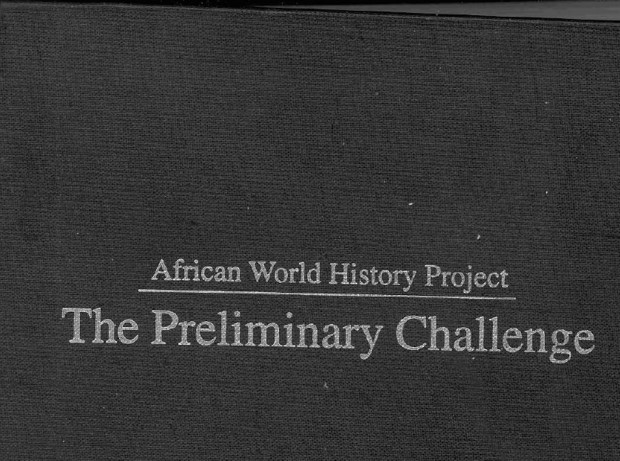 Info: "The 'Preliminary Challenge' of the Association for the Study of Classical African Civilization's (ASCAC) African World History Project (AWHP) is designed to provoke African-centered scholars to develop a basic tool for the liberation of the African mind. Most African historians trained in foreign universities have been shackled with non-African theoretical frameworks, historiography's, and methodologies. While we should avail ourselves of any methods that benefit our project, we should first seek African ways of thinking and searching before embracing foreign epistemes, which we may not need and which may in fact defeat the objectives of the project.

The project that we are promoting started more than two centuries ago when Africans began to read and discuss the doctrines of the European philosophers of the eighteenth century. European thinkers such as Montesquieu, Voltaire, Hume, and Kant began to fabricate the doctrine of white supremacy and 'Negro' inferiority, which led to the most brutal campaign of cultural genocide known to humanity. Their philosophical discourses added fuel to the vulgar attitudes and reactions resulting from the encounters of Africans with Europeans in the context of the European slave industry.

The reaction of the Africa leaders in the Diaspora to these atrocities was remarkable under the circumstances. With little or no formal training (actually a blessing in disguise), these thinkers began to glean gems from the literature of the oppressor. They perused the Bible of western Asia and the works of Greek historians. They found information about the Nile Valley Civilizations of Kush (ancient Ethiopia) and Kemet (ancient Egypt), and upon those pillars they began to construct an African-centered historiography. While the effort goes back at least to the last decade of the eighteenth century, the project was perhaps best articulated by David Walkers in 1829 when he taught: 'The Egyptians were Africans ... such as we are ... some of them yellow and others dark ... about the same as you see the coloured people of the United States at the present day.' Subsequently, he instructed all Africans to 'take a retrospective view of the arts and sciences -- the wise legislators -- the Pyramids and other magnificent buildings -- the turning of the channel of the river Nile, by the sons of Africa ... among whom learning originated and was carried thence into Greece.' David Walker, thus, emphasized the necessity of grounding the assessment of the condition of African people in Nile Valley Civilization. This instruction had been anticipated by Richard Allen and Absolom Jones when they evoked the biblical passage about a Prince coming forth from Egypt and Ethiopia stretching for her arms. A few years later Prince Hall had emphasized his belief that the Jewish prophet Moses had received his first wise teaching from his Ethiopian father-in-law.

Walker's instruction was followed by African nationalist leaders throughout the nineteenth century. Martin R. Delany, Henry Garnet, Edward Blyden, and Henry Turner all emphasized the Nile Valley connection. The theme was raised to a higher level of relevance by Cheikh Anta Diop and George G.M. James in their 1954 publications.

Thus the African revolution which would liberate the African body and mind was firmly linked to a classical African past. The history of our present undertaking can be traced directly from that historical context.

The ASCAC project was proposed in 1985 at its second annual conference. The proposal was an expansion and refinement of the 'Memorandum on the Africa World History Project' that had first been presented at the annual conference of the Association of African Historians held at the Center for Inner City Studies in 1982. After more than ten years of discussion, the project was formally launched at an ASCAC mini-conference. ASCAC President Nzinga Heru provided the leadership that brought the conference to fruition. The meeting, hosted by the Midwestern Region of ASCAC under the presidency of Abdul Aquil, was help in Detroit, Michigan in 1995.

The essays in this volume, with three exceptions, were authored by ASCAC members who attended the conference. The exception are previously published articles by two ASCAC founding directors and an excerpt from a book published previously by a founding member of ASCAC.

Although there was considerable consensus about the general nature of the project, some significant differences occurred. Discussion of these differences was quite fruitful although some of the differences remain and are reflected in the following essays. This volume sets a precedent of letting the African conversation unfold as we attempt to forge a consensus on methodology for our intellectual endeavor. The contributions were developed at different times and in various contexts, but they reflect discussions among the senior authors that have been going on for more than twenty years. The younger contributors were inspired in part by these discussions and have no been enrolled in the conversation.

The African World History Project is projected as a multivolume restatement of the national memories of African peoples. The discourses to be published can only be representative of the totality, which will require time, energy, and resources far beyond our present capacity. The first projected volume will explore the various dimensions of historiography and methodology and present an overview of the methods we will use in the volumes that follow.

The research commission of ASCAC will issue a call to work early in 1998. An AWHP conference will be convened for the purpose of planning the project with emphasis on the first volume. All African researchers are invited to participate and submit for consideration ideas and papers that address the relevant issues.

'The Preliminary Challenge' is a Serekh announcing the beginning of this project. It is also an invitation inviting African scholars, students, and multitues to:

'Come back to Kemet; come back to the Black city and join in the restoration project."
- Jacob H. Carruthers