Haiti: The Specter of Saint-Domingue 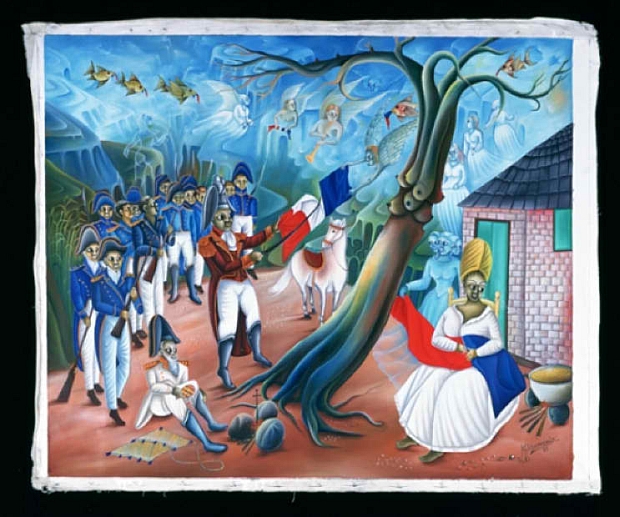 Late last January I had an uncomfortable conversation with a friend on whether or not the increased awareness among Washington’s young, black college-educated crowd had become trendy in the aftermath of the devastating earthquake of 2010. My friend’s comment, which profoundly troubled me at the time, was made in the context of what he perceived to be a dearth, if not an outright silence, of Haiti in the popular discourse of young black folks. In some ways, I think my friend’s statement gets at some sort of truth.

I think that while a general knowledge of anti-colonial and anti-racist struggles in Africa, the Caribbean and Latin America has entered our political vocabulary, when we discuss Haiti, something breaks down. What I mean is that while some us get, or have someone school us, to the world historical importance of slaves overthrowing their masters and creating their own state, it is defined in a circumscribed way. “The Haitians won their independence but…”

Yes, the slaves Saint-Domingue defeated the French and British armies at the height of each empire’s respective might; and yes, they did hold the Declaration of Man and Citizen to mean all men, taking the most noble dream of the Enlightenment thinkers into a practiced reality; but, despite its profound world-historical impact, the Haitian Revolution does not enter the black historical imagination as a freedom dream.

Rather, as far as Haiti does enter our discussions of freedom it is always an uncanny, spectral presence. In America, where our own Revolutionary war is seen as a bloodless, if not conservative transfer of power, where southern slaves are seen as only passive recipients of the Abraham Lincoln and the Union army’s benevolence, where the inner-city uprisings that followed the assassination of Martin Luther King Jr. are blamed for the contemporary urban crisis, we are left with no room to conceive the Haitian Revolution at all, let alone as a success.

We fail to intellectually engage with Haiti at our own peril. While many were offended by televangelist Pat Robertson’s remarks about the Haitian Revolution being dependent on a pact with the devil, the underlying logic behind the comments demonstrates the persistence of racial ideology in this moment where we are most vigilant to exorcise racism from our public discourse.

The schism between black magic and white science, that black people are inherently irrational and that white western civilization is inherently rational, found its birthplace in the Atlantic world during the age of Revolutions. In order to exclude slaves and free blacks from natural citizenship rights, you must somehow define blackness as not the same. In Roberston’s case, describing religious practices as unnatural does the work of highlighting racial difference. Thomas Jefferson suspending all commerce with Haiti in 1804 and calling the country’s leaders “cannibals of the terrible republic” also does the same kind of labor.

Rather than defining Haiti as the historical exception, thinkers and activists concerned with black freedom should return to the Haitian Revolution as the genesis moment of modern racial ideology. Here, in the years between 1791 and 1804, a sort of “black science” is introduced that thoroughly understands the logic of universal manhood rights and attempts to give the idea a cogent shape. In response, the various imperial powers, and most especially the United States, respond with a sort of “white magic”. That is, begin a larger, profoundly unscientific project of giving race, a previously unimportant typological trait, both social and biological significance. This magic is then transferred to the hands of the state, which is free to use both legal and extralegal mechanisms to compel citizens to follow the racial hegemony. Ultimately, in order to shape the terrain of ideological struggle, and raise the stakes of what should be demanded in a larger struggle for freedom, equality and social justice, we must return to the moments when previously unimagined opportunities were possible.