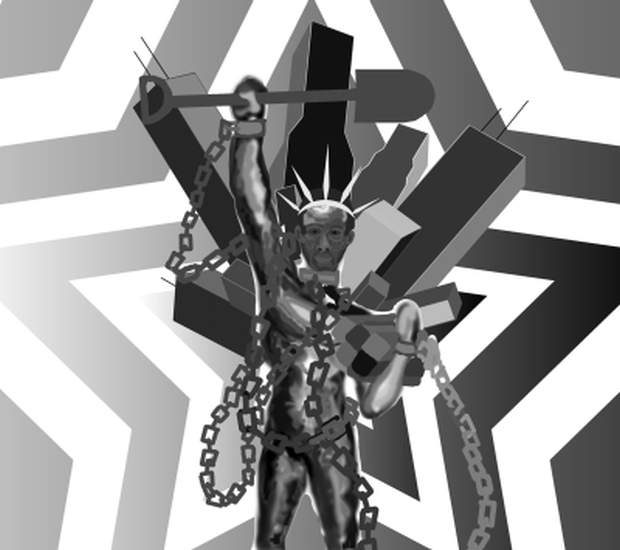 When slavery enters the American consciousness--all too rarely, unfortunately--it does so with a decidedly Southern tilt. Slavery is an old white "massa," looking something like Colonel Sanders, rocking gently on the porch of a broad plantation home, drink in hand. It is a group of slaves bent over at the waist in the fields, singing about sweet chariots to ease the boredom of cotton picking. Or perhaps, it is a plump mammy waiting on her master's family, trying to avoid the fierce stares of jealousy and anger aimed in her direction by the master's white wife, furious about her curiously light-skinned slave newborn. Whether condemned as an inhuman generator of brutal whippings and rapes or--in the unreconstructed Confederate version--upheld as the benevolent caretaker of contented sambos, slavery remains a quintessentially Southern institution. To be sure, a fleeting image of Northern slavery sometimes impinges on this Southern view. But slavery in the North seems an anomaly: a few slaves scattered here and there, all freed at some point, presumably after the Revolution.

The impressive slavery exhibit currently on display at the New York Historical Society alters this consciousness. It reveals the centrality of slavery to the history of our nation's largest city. Slavery was no mere sideshow but an edifice so strong that it took twenty years before the egalitarian ideology of the American Revolution could even begin to chip away at it. When emancipation finally came, it did so slowly and haltingly, so that blacks found freedom elusive even after they escaped the official bonds of servitude. Though the exhibit is not perfect, its few flaws do not subvert its mission. Its graceful integration of multimedia, primary documents and artistic presentation represents an important stride toward an honest view of the universality of slavery in American history.

Though few realize it today, slaves literally built New York. In 1627, the Dutch West India Company sent a dozen or so slaves to Manhattan, in what was then the Dutch colony of New Amsterdam, to contribute their hard labor to the construction of basic infrastructure. Slaves built docks, roads and a network of forts to protect the growing port. They also built a wall across the island, which served as the inspiration for the name of the road that eventually traced its path. In a very real sense, then, even Wall Street owes its origins to slavery.

By 1664, when the English drove out the Dutch, the newly renamed colony of New York had 800 slaves, more than all of Virginia. By 1705, 42 percent of city households held slaves, and though the numbers fluctuated throughout the nineteenth century, at certain times up to 20 percent of the city’s population was enslaved. Only in Charleston, South Carolina, did slavery play a larger role in urban life. And servitude in New York was not fully abolished until 1827--two hundred years after it began. Do the math: black New Yorkers have known slavery longer than they have known freedom.

Inspiring multimedia presentations throughout the exhibit help bring this reality to life. One gallery, for example, illustrates a central truth of slavery: that the labor of enslaved black workers made many people extremely rich. As an informative chart shows, in 1700, for instance, a slave could be bought for £5.21 (about $354 today) and sold in New York for £23.6, a nifty 400 percent markup. A flat-panel TV screen mimics a CNBC-type financial ticker, but instead of noting the latest Microsoft or WalMart stock prices, it tracks the arrival of one slave ship after another, reporting the number of human cargo, and lists some of the many occupations practiced by enslaved laborers (everything from farming to ironworking to sailing).

The story of slavery is more than an economic one, of course. One dark facet of the human side emerges from a surprising source: a reproduction of the seemingly bland logbook of Captain Peter James, who traded in West Africa from 1748-49. The book is mainly dry tables of products (including human "goods") bought and sold, but also suggests the tragedy of the middle passage. Slave merchants, the exhibit reveals, expected to lose about 15 percent of their "cargo" on the journey: collectively over a million dead men, women and children pitched into the ocean to rest at the bottom of the Atlantic Ocean.

The overwhelming terror of slavery did not stop slaves from resisting their fate. Major slave rebellions occurred in 1712 and 1741, followed by increasingly restrictive slave laws. Many slaves also ran away, and visitors can examine a number of advertisements seeking return of escaped bondsmen. In one of the coolest features of the exhibit, visitors can peek into a well and see in a video projection a reflection in the water of a group of slave women discussing--in carefully hushed tone--a number of potentially subversive topics: rumors, opinions of masters and fellow slaves, and the like. As the exhibit notes, "There were two New Yorks, one public and one secret," and the creation of that secret New York gave slaves something that was their own. Not all resistance to slavery took the overt forms of rebellion or escape.

All in all, these sections of the exhibit are beautifully designed and very informative. Some visitors may find one feature somewhat aggravating, however. Instead of providing a structured narrative with a detailed story spelled out as you walk along, the exhibit focuses on individual primary sources (such as particular artifacts, laws, documents) and multimedia exhibits. In many ways this is a good thing--it forces you to really engage with the material rather than passively digesting it. Yet it can be difficult to follow at times, especially because the various audio and video aspects of the exhibit often create a cacophony of voices that make reading eighteenth-century newspaper articles a challenging task.

Furthermore, there is very little detail on the actual lives of slaves in seventeenth and eighteenth century New York. We get a few impressionistic portrayals--reports of disease, a few sculptures of slaves at work--but visitors who want more depth will have to consult some of the detailed portrayals of individuals that can be found in various folders and books placed discretely in corners of the exhibit. Luckily, the second part of the exhibit, which details the long, winding path to freedom, suffers from neither of these problems.

The strong words of the Declaration of Independence, trumpeting the equality of all men, sounded to many like the call of freedom. Yet, slaves soon discovered that the only sure way to earn their freedom during the Revolutionary War was to flee to British lines. 10,000 slaves came to New York City--a center of British military presence--and many followed the war's losers to Canada in 1783, realizing that slave-owning statesmen mouthing the words of liberty could not be trusted to deliver the real thing.

The NYHS shines in its portrayal of the difficult struggle for freedom in the new republic. Despite the efforts of slaves and a few antislavery whites (including Alexander Hamilton), it wasn't until 1799 that the New York legislature finally passed an emancipation law. Worse, this law did not actually free anyone. It was instead a plan for gradual emancipation. Slave women born after 1799 would gain their freedom only after 25 years of indentured servitude, while men born to enslaved parents would not be free until their 28th birthday. Those who were already enslaved would presumably remain that way until their death. In a later amendment, the legislature aimed to end this injustice once and for all, promising universal emancipation by 1827 (In fact, as late as 1840, four unlucky men somehow remained enslaved in New York State, despite emancipation). But until then, black Americans remained trapped in what the exhibit calls the "Danger Zone." With freedom in the air, the number of free blacks grew steadily, yet the dangers of slavery remained.

A set of audio recordings illustrates the continued uncertainty of black life in the early 1800s. With freedom now an inevitability, communities and courts increasingly protected the limited rights of enslaved blacks. In 1809, for instance, a court found Amos Broad guilty of repeatedly mistreating his slaves, including scalding them with boiling water. The court forced him to grant them their freedom. The realities of slavery continued for many others. Unfortunately, another recording shares the diary of a slave-owning mistress who congratulated herself for "educating" her slave through vicious punishment. A horizon of emancipation did not spare slaves from such brutal "instruction."

Nonetheless, on July 4, 1827--51 years to the day after the Declaration of Independence declared all men free--complete emancipation in New York finally arrived. The exhibit ends with an animated depiction of an Emancipation Day gathering, complete with the words of Reverend William Hamilton condemning slavery and welcoming its demise. The joy of freedom is palpable, but one also senses a tinge of apprehension. For even in freedom, the exhibit shows, blacks faced continuing obstacles. The same laws that opened the vote to all white men in the 1820s maintained property qualifications for blacks that were so high that in 1826 voting rolls counted only 16 blacks in all of New York county. Increasing immigration from Europe, meanwhile, threatened the few jobs open to blacks, and the 1820s also saw the rise of a biological defense of racism.

In revealing the true extent of slavery in New York, the NYHS has already done the public a great service. Yet, by ending in 1827, this exhibit leaves the visitor alone to ponder the present-day implications of this sad history. Some of slavery's lingering effects presumably will be fleshed out in a sequel planned for 2006-07 at the NYHS, entitled "Commerce and Conscience: New York, Slavery, and the Civil War." Hopefully, this will explore New York City's extensive links to Southern (i.e. slave-produced) cotton, the city's reluctance to support the Civil War (in 1860, Mayor Fernando Wood argued that should the South secede, New York City should break away from the union to form an independent city state that could continue to trade with the Confederacy) and the 1863 draft riots in which aggrieved Irish workers protesting the Civil War draft fomented the bloodiest urban riots in American history, killing more than 100 blacks and abolitionist-minded whites.

Running through these and many other events is the insidious current of racism, a powerful enduring force whose origins the exhibit unfortunately largely ignores. For many years, historians have debated the origins of racism in America. Did racism lead to slavery, or did slavery create racism? As scholars such as Edmund Morgan and Ira Berlin have shown, in the early 1600s, black and white workers played, worked, and even slept together on a regular basis. Not until slavery became more institutionalized did this cross-color collaboration disappear. While other historians, Winthrop Jordan most prominent among them, have argued that prejudice against Africans was a longstanding European trait that predated slavery, it seems clear that much of the racism that still exists in this country is a direct result of institutions and ideas created by slavery itself. Examining this debate in the context of New York would show that racism is not a timeless human trait, but a socially-constructed one, and that the legacy of slavery is thus what we make it. As the struggle to deal with this legacy continues. As the exhibit says of one black family: "Slavery might end, but would they ever escape its shadow?" We may only hope that a true understanding of the past, one that illuminates the tragic lives of slaves even as it promotes their dreams for freedom, may enable America to step finally into the sunlight.