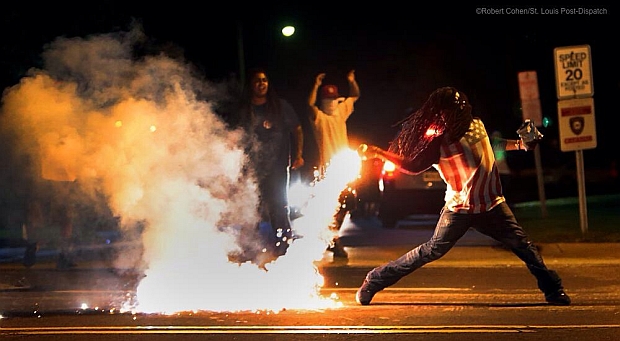 {photo: The man hurling the canister has said he was throwing it not at police, as has often been stated, but away from children who were at the protest.}


As America began to gear up for its incredibly wasteful (more than $40 trillion since 1972) and utterly futile “War on Drugs,” there were three critical federal actions that contributed to our current vastly over-militarized police forces.

In 1981, the Military Cooperation with Law Enforcement Act was passed. This law authorized military collaboration with civilian law enforcement agencies and dramatically expanded the Army’s participation in counterdrug efforts and included arming and training of local police with military grade weapons, free of charge, at the discretion of the Secretary of Defense.

Then, in 1984, Congress passed the Comprehensive Crime Control Act, supposedly to assist in controlling the crack cocaine infusion in urban communities. This law, tied to a civil forfeiture provision, allows law enforcement to seize property without a conviction, or even charges being levied, if a person is suspected of illegal drug activity.

Finally, in the 1990 National Defense Authorization Act (each year this bill funds our military) there was included a provision — “Section 1208” — that allowed the Secretary of Defense to transfer weapons and ammunition that was “suitable for use by such agencies in counter-drug activities.” This law was supposed to give police the firepower needed to “effectively” execute the Drug War. In the 10 years that followed, thousands of tanks, helicopters, grenade launchers, and assault rifles were granted to municipal police forces.

But the militarization of our police forces was not yet complete.

Enter the “War on Terror.” According to a recent New York Times article, as the wars in Iraq and Afghanistan have been winding down, much of the equipment used by our soldiers to fight those battles is being transferred to police departments, both large and small, throughout the United States. (emphasis mine)

During the Obama administration, according to Pentagon data, police departments have received tens of thousands of machine guns; nearly 200,000 ammunition magazines; thousands of pieces of camouflage and night-vision equipment; and hundreds of silencers, armored cars, and aircraft.”

The New York Times article provides the following data on hardware provided to “our” police departments since 2006:

435 other armored vehicles – including cars and trucks

SWAT Teams, once mainly used for hostage situations or other specialized needs, are now deployed increasingly for all types of raids, including as part of a liquor inspection at a night club in Louisiana and barber shops in Florida (resulting mostly in charges for “barbering without a license”).

Radley Balko, in his book, Rise of the Warrior Cop: The Militarization of America’s Police Force, says:

“No one made a decision to militarize the police in America. The change has come slowly, the result of a generation of politicians and public officials fanning and exploiting public fears by declaring war on abstractions like crime, drug use, and terrorism. The resulting policies have made those war metaphors increasingly real.”

The culmination of these knee-jerk responses to societal ills – economic-driven crime rates, drug use, terrorism-induced hysteria, etc. – has created police forces that increasing look at our citizens as the enemy, especially in black and brown communities. And, of course, our communities increasingly see the police the same way – as an occupying force.

It is past time for an organized, persistent response to this over-militarization, and the lack of community input into police policy and practices. The overt abuse and outright murdering of innocents must stop.

Today, the men and women, young ladies and young men of Trinity United Church of Christ stand in solidarity with the family of Michael Brown and the citizens of Ferguson, Mo. We stand in solidarity with the families in Chicago that have seen loved ones killed carelessly, and even purposefully, by police. We stand for a reorganizing of our police force, so that instead of being accountable to politicians, it is accountable to the community.

#HandsUp! If there is to be change, we must be God’s change agents.