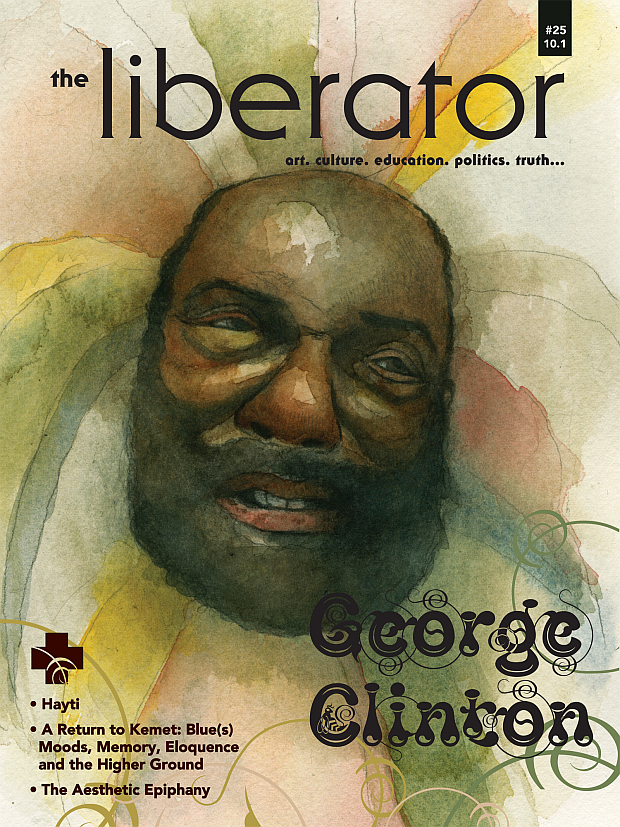 I was not yet born when many of music's most respected and celebrated pioneers were experiencing the fast life and restless times at the pinnacle of their careers. Nonetheless, the common trait between the musical icons that seems to resonate with me most, was their ability to possess a noticeable peace with aging or being wherever they are in life.

Bill Withers spoke presciently on the subject during Damani Baker and Alex Vlack's documentary, "Still Bill": "One of the things I always tell my kids is that it's OK to head out for wonderful, but on your way to 'wonderful,' you're gonna have to pass through 'all right.' When you get to all right, take a good look around and get used to it, because that may be as far as you're gonna go."

Mr. Withers' words lingered with me as I considered George Clinton -- the man whose catalogue very few artists can boast or parallel; the man who is arguably responsible for the creation of an entire musical genre and largely credited as a primary influence of some of today's most provocative artists: Snoop Dogg, Pharrell Williams of N.E.R.D., Andre 3000, Will.I.Am, Kendrick Lamar. Yet, his refusal to wallow in accomplishments and, instead, restlessly create and perform music, is part of his journey to "wonderful." So far, in his humble opinion, he is just "all right."

Fred Wesley once told me that the musical relevance that James Brown consistently possessed was not an accident. It wasn't the classic hits that enabled Mr. Wesley and the JB's to tour season after season, year after year; it was James Brown's genuine interest in what young people were doing. Mr. Clinton expresses a similar interest in young people's music; and this affinity has kept him both fresh in musical approach and in his ability to connect with different audiences and generations of music lovers. He embraced a relationship between himself and the youth, founded in mutual inspiration and a belief that "it's important young musicians respect old musicians, and that the old ones pay attention to the young ones ... that's how I stay on top of what's definitely happening." He elaborated on this in a conversation with Dr. Cornel West on the American late night program, "The Late Late Show":

"That's why we stay around so long. For parents to say 'I hate the kids’ music,' or for older musicians to say 'I hate that music,' that's the music I'm going to look for. 'Cause that's gon' be the next music. Kids are supposed to get on your nerves. Kids are supposed to make you evolve. They have a way of gettin' along without knowing any of the history of it. It's the best music in hip-hop that brought race relations closer than any other music I know. Whatever their relationship ... whatever they’re conversing with each other ... it works for them. The same love is plentiful around the world with that. So again, I'm with the kids, 'cause they've got the new thing. And 'long as it's working, I don't want to relate to them how it 'used to be bad.' 'Cause words ... hey we got brains, you can change your mind, you can change your relation to words, or pitches, or anything else."

And that's how we first "met" -- not through "Maggot Brain" or "I Bet You," but through the music of Dr. Dre and Snoop Dogg. I'm taken back to morning recess in a Pasadena, California school yard. I was in second or third grade playing dodge ball with friends, while we all ping-ponged lyrics to random tracks from what was then the most talked-about, edgy album of its time. I was 8 years old when The Chronic dropped, and the underlying layers of Parliament's front-man vocal trademark embedded within tracks like "Let Me Ride" was nothing less than hypnotic, new to my ears and memorable. Mr. Clinton, against drawn out bass lines and psychotic guitars, held me captive. It wasn't until later that I learned nearly half the album -- and most of Dre's work at the time -- was a direct ode and revisit to George Clinton's work and musical style.

I'd bet I was even more eager to check out The Chronic album upon seeing my mom's reaction to it's cover design reminiscent of a popular French marijuana rolling paper package, "Zig Zag." The only person in my family that had a copy was an uncle of mine and my folks would encourage him to hide the CD, along with all others that harnessed music glorifying the gangsta life of the '90s. At 8 years old, it felt like a life mission to really listen to that album. I was pressed to get a hold of it, just as much as my parents were pressed to censor it from my little, grade-school world. Once I did, I had to memorize every beat and lyric, because at lunch time, third grade was all about reciting verses with my schoolyard buddies. Just like Dre did, but with less bass in the voice, of course -- a lot less bass.

Mr. Clinton would have laughed at that. That experience illustrates precisely what Parliament-Funkadelic always stood for: The curiosity and rebellion with authority that accompanies youthfulness. So much so, that I'm certain if my parents would have sought Dr. Funkenstein's prognosis on my being banned from listening to The Chronic as a child, he'd have let them know that I was going to inevitably find a way to listen.

Later, I learned that prior to the controversial album cover of The Chronic, Mr. Clinton's album covers -- designed by Overton Loyd -- went against a similar grain. In high school, when I became curious about artists like N.E.R.D. and J Dilla, I began digging for George Clinton's music and found my head spinning from the cover art. Most of the art depicting erotic alien or robotic female creatures seemingly doused in chocolate milk or mud; triple entendre collages, breasts and afros; and a whole lot of spaceships rising above the Establishment. It was so far left-field that it stirred up controversy and created a movement, much like Dre did with "Gangster Rap" or G-Funk. From P-Funk to G-Funk, going left when everyone goes right clearly makes life interesting and enticing. When you've lost that way of living, maybe then, you've officially become old.

When we convened at the 9:30 Club in Washington DC, miles and years removed from my initial encounter with him, I discovered the interest and intrigue was mutual. "Hey man," he says, after Carlon (Clinton's loyal publicist/manager/right arm) makes the introductions. I smile at the sound of the oh-so-familiar, raspy, '90s gangsta rap interlude voice I remember from The Chronic. Perhaps my being from Los Angeles is partially to blame, but the nostalgia makes me feel at home.

"How you doing, Sir, I'm Opiyo with Rest In Beats."

"What's the name of the project?!"

"Well, we can let that be my free music sample to you, man."

Mr. Clinton is no stranger to the concept. He shared that he was going through settlement negotiations for a few legal issues regarding music samples used without his permission. In the past, he pursued judgments for hundreds of musicians for illegally sampling his hit songs and has an estimated 781 copyright registrations on file. The Godfather of Funk recently filed suit against 13 record labels and individuals, including Will.i.am, Fergie and the other members of the Black Eyed Peas, alleging copyright infringement for unauthorized use of the original sound recording "(Not Just) Knee Deep" in the Black Eyed Peas’ songs "Shut Up" remix and "Shut the Phunk Up" remix.

"Our lawyers are talking now. We're going through a little something, but it's looking like we're going to be OK."

"What are your feelings toward sampling?"

"I love sampling! I like how it's a way the young people get to learn and be exposed to the older music."

Like James Brown's musical director, Mr. Wesley, and Tom Scott, Ahmad Jamal, Patrice Rushen, Roy Ayers, David Axelrod, Sly Stone, and Lonnie Liston Smith, Mr. Clinton is in the small group of recording artists or musicians that have been sampled by some several hundred hip-hop, rock and roll, R&B or pop recording artists. Who wouldn't sample these artists? They make incredible music and if we danced to it yesterday, we'll most likely dance to it tomorrow. In most cases the original or sampled artists will receive royalty checks regularly but, for others, the labels and record producers will pay a fee that rarely makes it to the artists.

"A lot of times, the fees are paid, but we don't see the money," he continues.

"The money doesn't make it to you?"

"It doesn't make it to us. And these shows are expensive. And Parliament-Funkadelic, our band, is big. We love doing shows for the fans, but we have to cover food for the band, the tour buses, hotel and musicians' traveling costs. The money can help with that."

"So, where does the money go?"

"Makes you wonder," he responds with a content smile. Our rapport comes easy -- like a candid Saturday summer afternoon chat, lakeside with my Grandpops. "It's all about respect from the young to the old generation, but also from the old to the younger generation. It goes both ways."

The ugly details leave me feeling some kind of way about the numerous stories artists have shared with me regarding the mystery middle men between a commercial artists' art and the fans. But my quest to learn more about the artists who've influenced the music of today's generation, combined with the wealth of experience and stories Mr. Clinton was eager to share with me, created a synergy that dissolved the six decades between us. "Rest In Beats!" Clinton repeats with a smile.

"Hey thanks so much, Pops, you all travel safe." They pack up, thank the staff and cruise out in a caravan of tour buses -- like any Rock and Roll Hall of Famer would. His curiosity and excitement behind pushing boundaries in entertainment, being a cheerleader for people's differences and what young people are doing, have convinced me of one thing: There's a moment in each of our lives where the best of us tend to realize that as we get older, we are in a way getting younger. And George Clinton is, by far, one of the youngest old school cats that I've ever met.