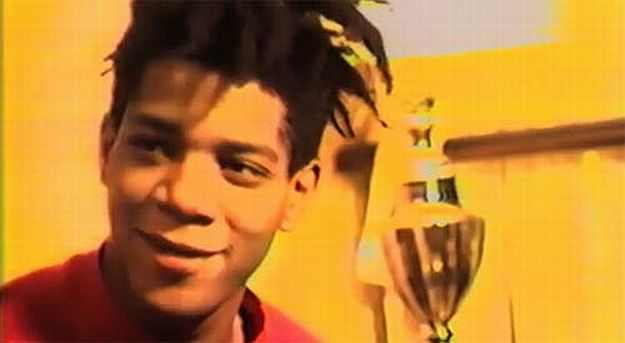 "Robert Farris Thompson's Flash Of The Spirit is probably the best book I ever read."
- Jean-Michel Basquiat

(Paint Magazine) In Basquiat's Shadow: The Spook that Opened the Door. It was Jean Michel Basquiat (1960-1987) that paved the way for the Black artists that are successful in the elite museums and international biennials. Basquiat like no another artist found a way to get through. No modern artist touched so many different people on so many different levels of society: the barrio, Harlem, movie stars like Johnny Depp and Madonna, Metallica, European collectors, Guurl bands, bell hooks, Post colonial studies scholars, Graffiti, and Street art artist. The poor, the rich, and the in-between claim Basquiat as their own. His partnership with Andy Warhol, his show at the Whitney, and his two million dollars a year “advance” from his gallery, and his bohemian death are not to be forgotten.

Although in his work he blasted the racism and corruption of white society, the more he blasted them the more they bought. The New York Times compared him to James Dean. Art theorist and womanish philosopher bell hooks described him as a sacriﬁcial ﬁgure. Art historian Robert Farris Thompson called him heroic.

"...identities are the names we give to the different ways we are positioned by and position ourselves in the narratives of the past …”
– Stuart Hall

“The Boogie Man goner get you. If you don ’t watch out ”
– Children’s Folk Song

Madonna called him lover and Andy Warhol called him friend. Thelma Golden gave him a job. For the old school art critics like Stanley Crouch, Hilton Kramer, Robert Hughes, he was just a grafﬁti artist (which he always denied) that never learned how to draw. But Basquiat’s Mojo broke their power. How cool for a high school dropout to break the system, live like Picasso, and die like Jimmy Hendrix or Bird at twenty-seven. Even now,according to cultural critic Greg Tate, “the art world is looking for another Basquiat, another Black artist that can… reach the bourgeois and still rock the boulevard. ”However, the question remains: how did a teenage street artist go from tagging walls to an international art star, becoming the highest-paid black visual artist in history, in only eight years? Thousands of educated, degree-toting or self-taught black artists linger outside of the system. What did Basquiat know?

Perhaps a clue lies in the different responses to his work by bell hooks and cultural studies expert Dick Hebdige to Basquiat’s Irony of a Negro Policeman (1980). “In which a foreground of white paint delineates and obscures and fragments a multicolored skeletal background ﬁgure…it is the tragedy of black complicity and betrayal …dread …ravished …torn apart …appropriated …made to serve the interest of white masters …” (bell hooks, Race-ing Art History). hooks sees a critique of Western Imperialism and its reproduction in the arts. However, Hebdige see a reverse image of himself or at least his culture: “The canvas can suddenly turn into a mirror or (if you ’re white as I am) a photographic negative from a book of family snapshots mutated into a dream (Jean Michel Basquiat:Marshall). ”Later in his essay he enters the Black Looking Glass: “by narrating that history in the language of the nursery and school yard through the simulated infantilism of stick ﬁgures and scribbled skylines he draws us right into the terrordome …” hooks sees an art that points a ﬁnger at injustice. Hebdige sees in Basquait’s wounded grotesques ﬁgures an opportunity to climb on the Cross. Like the science ﬁction series Quantum Leap, Hebdige can leap from his white world into a black twilight zone. Viewers can project on Basquiat’s spooks with their own urban demons and childhood phantasms.

For those that are in denial about American racist heritage, the celebratory playful façade is as far as such people will see. However the daring like Mr. Hebdige will brave the chaos behind the picture frame Hebdige continues: “The frame becomes a threshold over which some of us may hesitate to step, fearful of confronting our complicity in the barbarism …perpetrated… in our name …” or to quote President Clinton “I feel your pain.”

“The solemn and noble Christ-like shade in Death of Michael Stewart (1983) is just a silhouette suspended beneath a gauntlet of two attacking policemen. Rendered in a Graf ﬁti art style, The ornate placement of the policeman and the overhead inscription Defacimento? is reminiscent of the triumphal arches the Romans built to celebrate military victories. This formal yet sublime tribute testi ﬁes to the abuse of state power, in particular the death of young grafﬁti artist Michael Stewart, who died while in police custody. However, anyone abused by institutional power could identify with Basquiat’s simple shadow. The freedom promised in Basquiat’s work is assessable only to the courageous. bell hooks implores whites to move beyond their own fears:“to be in touch with senses and emotions beyond conquest is to enter the realm of the mysterious.”

However, while Basquiat was not the ﬁrst to develop this technique (Bob Thompson comes to mind) he certainly was the most successful from the forties through the eighties. The Blacks in the academy with greater technical skills and education have re ﬁned and softened the Basquiat methodology.
Basquiat Lite

Black Spooks are haunting America’s top museums. The Whitney, the Museum of Contemporary Art, Art Institute of Chicago, Studio Museum of Harlem, and Museum of Modern Art and over twenty other mainstream museums have phantasms in their collections. Kerry James Marshall’s Super black ﬁgures in neoclassical settings, Kara Walker’s embattled shades, Gary Simmon’s haunted decors, Helen Gallagher’s racial changelings, and Fred Wilson’s possessed museum installations are just some of the Black artists whose artworks revise or challenge a Western historical worldview in which blacks voices are suppressed or erased.

Critical theorist Walter Benjamin envisioned “material histories,” an exhibition style in which objects or images of historical overtones are placed in ironic juxtaposition to each other. The contrast of collage chronologies would create new associative reverberations, a jazz model of history using artifacts as notes. Such a visual arts model would allow the silenced ancestors to speak, the deaf white world to hear, and all to see.

For example, Fred Wilson uses objects from a museum’s collection to turn them into haunted houses. Wilson’s Mining the Museum exhibit juxtaposes slave bracelets against elegant silver from the same plantation to highlight the economic roots of antebellum wealth. Kara Walker's early works present the unspeakable brutality of master and slave relationship as fragile silhouettes crafted with a re ﬁned oriental grace.

Walker’s frameless cutouts of horror appear as museum stickons rather than artworks. It is as if she is implying that White society regards slavery as just a troublesome addendum to American history. Gary Simmons' dreamy architectonic drawings with white chalk on a black board undercut an American Dream of homogenous white neighborhoods, erased by the civil rights movement and black background presence in the white subconscious. America’s most decorated Black female artist under thirty, Helen Gallagher demonstrates that society’s outcast may become fabulous by giving everyone blacks, whites, even space aliens, the Jean Harlow/Lil Kim platinum coiffure in compliance with America’s obsession with blondness. Gallagher blends Photoshop, drawing, and beautiful Japanese paper, creating works that are ironic, humorous, and exquisitely lush. What is their secret? For the white viewer the black image in a work of art, no matter how benign, overwhelms the composition. Therefore Black artists had to invent ways of “correcting ”for the distortions in white perceptions, by mystifying the black image and using styles and iconographies from Western Art History or Pop culture. The combination of fear, familiarity, and beautiful composition allows the artists’ message to get through the ﬁlters of difference that block the White subconscious mind, Whites being the museum artists’ major audience, for now.

Thelma Golden in her famous Freestyle Show at the Studio Museum of Harlem suggests that black artists move away from spookology by declaring this decade the PostBlack Era, not Post African American Era, or rather Postspookism. I wish her God’s Blessing. However, many white patrons will just seek their ﬁx elsewhere. For Black Spookism, as Basquiat found to his pro ﬁt, is a hard habit to break. (source)