Buck And The Preacher (Or, African American Cowboys & Indians) 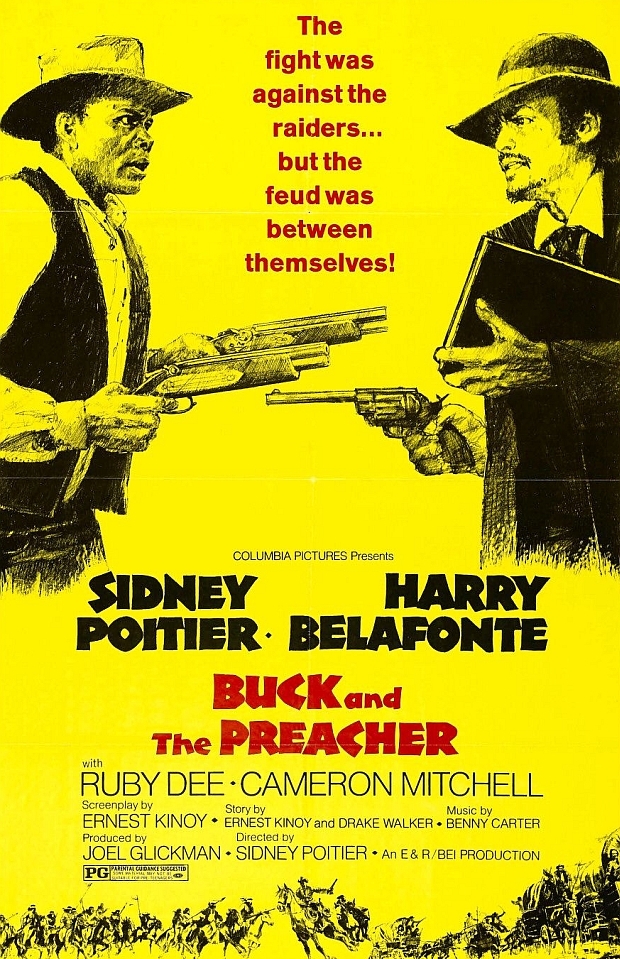 Our first video of the month is the classic Buck and the Preacher, starring Sydney Poitier, Harry Belafonte and Ruby Dee. In this movie alone, we see the power and ability of Sydney Poitier as an actor; never mind the fact that he directed the movie too. Hollywood’s recognition of Poitier this year at the Oscars was long overdue, and if Hollywood were about anything remotely real, this picture would have swept the Oscars back in the day.

Buck and the Preacher is set just after the Civil War and tells the story of Buck (Poitier), a wagon master who helps Blacks leaving the South make their way out west to start out fresh. Harry Belafonte plays the preacher, Buck’s sidekick, and Ruby Dee plays Buck’s wife. These three actors all show clearly, why they are legends. Poitier is able to emit strength and love with his eyes alone. He depicts Black manhood at its best. He is wise, keeps his word and refuses to give up. Harry Belafonte is perfect as the preacher whose motives and character keep everyone guessing. The audience and the other characters on screen are uncertain as to whether he is going to help Buck and the wagoneers, or take advantage of their vulnerable situation. Belafonte even conveys the preacher’s own uncertainty about what he is going to do. It is not until the preacher has made up his mind and actually takes action that the audience finds out “what he’s about.” Ruby Dee easily holds her own with these heavyweights, as Buck’s wife. With her depiction of Ruth, we see a woman who is weary; tired of worrying about and missing her man, yet she stands by him, supports him and is an asset to him. Without Ruth, Buck could not be who he is.

The best thing about this movie is that it is positive! Though there are scenes that break your heart, when you are done watching the movie you are left with a positive feeling. Buck and the Preacher treats movie weary Black audiences to images of: Black people working together, true love between a Black man and woman, a strong Black woman who not only supports her man but is invaluable to him, a cohesive Black community that works together for its survival, determined Blacks ready to fight for their freedom, Blacks and Native Americans working together, and Native Americans with a fighting spirit. Yes, all of this! Plus, the audience does not have to suffer through any “do good/ save the day” White characters, or any beat down “woe is me” Black characters. How is Buck and the Preacher able to portray all of this—the screenplay is the only answer.

The screenplay for Buck and the Preacher is tight and economical. Each scene sets up the next scene and each scene is integral to the plot as a whole. The brilliant acting and screenplay work hand in hand to keep the story moving and fast paced. There is no need for extra scenes that develop character motive, because all of the actors do such a good job establishing that with their acting. These actors are able to convey more with a twitch of the eye or a certain tone of voice, so that extra dialogue or longer scenes unnecessary...

As might be expected, Buck and the Preacher does not fall short in the message department either. No, it not message laden. In fact, the story is so compact that it is able to fit several in, and the messages just float off the screen. There are many messages: from, ‘cooperation leads to the salvation of the community’, ‘nothing of value comes without sacrifice’, and ‘never give up’, to, ‘trust your instincts’. However, there are two messages particularly relevant to Black American’s situation today. They are ‘never be afraid to fight’, and ‘freedom and self determination are worth the fight regardless of the numbers and the outcome’. This movie shows Black wagoneers facing the elements of the untamed West, and bounty hunters from the south who want to return them to serving White plantation owners. It is worth it to the wagoneers to face these obstacles and fight because freedom is a possibility.

Basically, Buck and the Preacher is such a good movie that I could go on about it forever. Cinematically it has everything, action, suspense, drama, comedy, true love, uplifting messages, and on top of all this a tight soundtrack. It set a standard in 1971 that stands today for how we choose to represent our struggle and ourselves. So rent it and go enjoy how great we are.