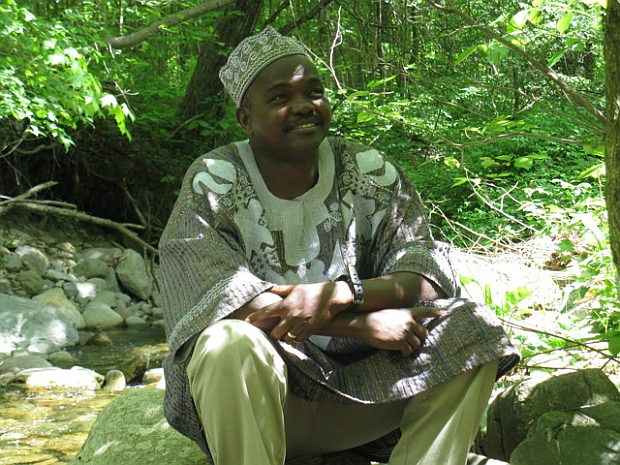 No lengthy introduction is necessary here. Author of 3 books: Of Water and the Spirit; Healing Wisdom of Africa; Ritual: Power, Healing and Community, as well as several audiobooks, Malidoma is the truth, simple and plain.

Liberator: In "Of Water and the Spirit" you say, "It seems obvious to me that as soon as one culture begins to talk about 'preservation' it means that it has already turned the other culture into an endangered species"... How do you feel about the current trend of American celebrities gaining an "interest" in Africa's development like Madonna adopting a child from Malawi; Jay-Z building a well, Oprah's school and the Live-8 campaign?

Malidoma Patrice Some: Too little too late. Still this is a commendable preservationist initiative. The sadness comes from knowing that the continent has been going down for centuries with little or no intervention of this nature even conceivable. I am left wondering how much of such initiative is self gratifying and how much reflects a deep calling to restore dignity to the continent. If, in "gifting" Africa, something is not accepted from Africa, in return, then on some level, it is a more gentle visit from colonialism; that is, if Africa is seen only as needy, without something to offer in return, then the benefactors are coming with the mindset of needing to "rescue" the continent from itself. I would feel excitement if I knew that the westerners, so generous with financial support, had also sought out an appointment with a diviner, to seek the support of the ancestors in their endeavors.

Liberator: You set out to study and fulfill your elder's wishes at a young age. Now an elder, what do you suggest should be the biggest responsibility of today's younger generation? What are ways that a culture can perhaps restore relationships between the young and old, so that more may be shared across generations?

Malidoma: Today's younger generation should be aware that their predecessors did very little to prepare the way for them to live a life that is purposeful and gift oriented. It is the daunting task of the youth to not only find their way through a maze of cultural confusion, but to also live in such a manner that they will be the first true generation of elders-in-training to mentor those who follow them. This will begin to happen as they have the courage to listen and to trust the voice within that says that there is better than what is shown. The young people will need to protect their spirits from being misdirected by the culture of consumption and to understand their frustration and anger as not theirs, but that of a culture that has already succumbed to the seduction of consumerism; this initiative will preserve their integrity and provide fertile ground in which true wisdom can have a chance of surviving and growing into maturity. To restore relationship between young and old, the old must stop behaving toward the young as if they have it all under control. The old must know that the young are not dumb and can see right through most masquerades. For the young and the old to relate to each other, hierarchy must be removed.


Liberator: What are the benefits of a male initiation process into manhood and do you think it is a necessary aspect of human societies?

Malidoma: To the extent that initiation merges the self with gift and purpose, one of the greatest benefits is a life that is aware and committed to delivering the gift it came to give, that was the binding element in agreeing to come into this world. Society will greatly benefit if its people understand that they are a part of it because they have a gift to give to each other, a purpose to fulfill. Initiation, therefore, allows society to by filled by men (and women), not by large children. Initiation also allows the individuals, as well as the community, to tap into the spiritual and energetic resources which are readily available, though not so easily accessed by the uninitiated person.

Liberator: You talk about homosexuality in "Of Water and the Spirit" when you were at the boys school and the priest were abusing children and children abusing each other, what are your feelings today on that?

Malidoma: It is sad to use the umbrella of an institution to legitimize abuse, yet abuse cloaks itself in a large garment of secrecy and legitimacy in order to survive and proliferate. But the healing which came later from knowing that I have never been alone, and that almighty Catholicism is not as powerful as it insists on convincing society that it is, has gone a long way to salve the wounds. That, plus the restorative power given to me by initiation and the healing power of gift and purpose contributed to calming my feelings. There is no resentment in my heart, though I have no tolerance for anyone who directly or indirectly condones or practices abuse. It is subhuman to harvest reward from the pain of another human, and it is no more human to remain silent in the awareness of this widespread cultural disease.

Liberator: How do you feel we, in the West, can most effectively assist the widows and children of AIDS/diamond mine victims?

Malidoma: First, follow what spirit tells you in your heart. Listen to the voice of wisdom telling you that these widows and children are you and your children, also. You are looking at yourself. So the first thing is to learn how to pray for them and for the world. In this ritual prayer, it is good to inquire with spirit for guidance in doing what is right. Spirit will, in turn, inspire what needs be done with integrity. It may also be helpful to view these people as messengers about the dark side of living in ignorance and rejection of the reality that each of our actions, our thoughts, has an effect on the entire world. What is happening in Africa, and on the rest of the planet, is the tragic side of the "butterfly effect" that says the gentle flapping of the wings of a butterfly, in one place in the world, has a subtle effect on the weather in another place in the world. The examples of the victims and survivors of AIDS and the diamond "industry" are very powerful signposts on the road we are traveling; they are inviting us to consider how we live and what our priorities are.

Liberator: What do you feel is the significance of African culture today (politics and all) on the future of the world? How do you feel about African-Americans receiving west African VISAs and the possibility of dual citizenship?

Malidoma: There is some sense in which one can see the world as African and Africa as the world. There is no geographical place in this planet that has not been touched by the energy of the Continent. It might not be clear yet to everyone, but the time is coming when the wisdom of the continent will exercise an undeniable appeal in the face of an all out failure of modern wisdom. So those VISAs are an initial sign of something much bigger in the making. Besides, African American need to know that they have a major role in the future of the continent of their ancestors. It's time for a conscious return to root.

Liberator: What is your perspective on the western reaction to the supernatural and in your travels how do western people receive it?

Liberator: What is your spiritual perspective now, and has it changed any since you've traveled to America? Have you incorporated any other spiritual aspects since traveling the world?

Malidoma: My spiritual perspective at this time is sustained by a deep hope for the awakening of human consciousness. There are evidences of a growing sense of the spirit in the modern world. In the face of the failure of organized religions to feed the hungry souls, spirituality has become more and more attractive to people in search of a holistic way of being. This is not the way it was twenty years ago. Back then I had to prove everything I was saying. Today, people are more accepting. Everywhere I go to share rituals with people, I am aware of the existing tradition of the area. To the best of my ability I welcome these traditions since they all belong to the ancient wisdom.