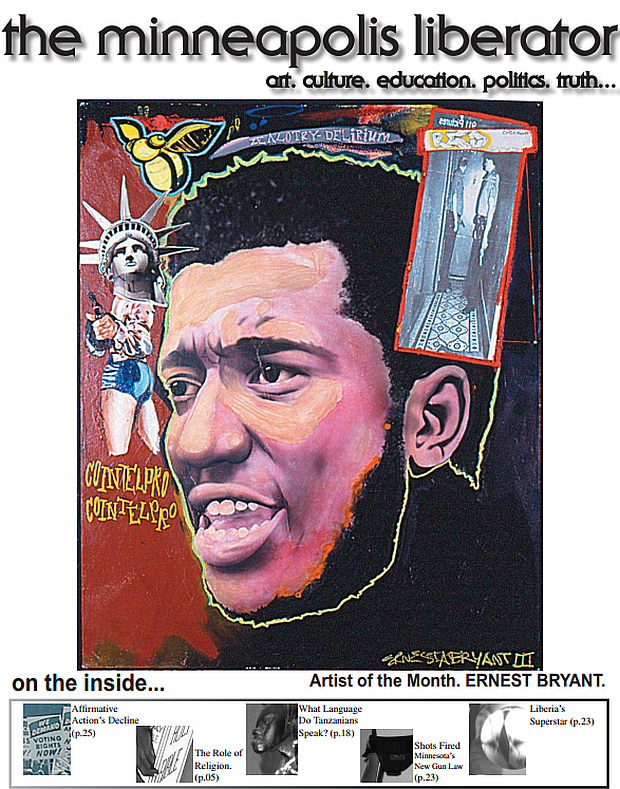 Liberator: What was your proudest moment as an artist?

Ernest: I got to go overseas and see how my artwork was perceived by an international community who had never met me before and didn’t really speak my language. I got to see how the majority of the people liked it; they felt what I was talking about and that made me happy.

Liberator: What made you decide that you wanted to be a career artist?

E: A career artist? I don’t know. It just kinda happened like before I would just make comics then I started airbrushing, then I started making big work and just kinda got caught up in it. Just being around it so much, you know, just being in the mix.

Liberator: You know how people be finding hieroglyphics and trying to translate em’?

Liberator: Say if someone found your piece of Eldridge Cleaver; what would you want them to get from it?

E: What I intended people to get out of it was the idea of duality as far as merit and somebody’s words and ideas. Like I had a screen print of Aristotle and everybody would be like oh, “This guy, he created logic you know; created philosophy, very famous you know; a super intelligent genius you know; very rational.” All that old western shit. Although Greeks are more like eastern really. But then I got Eldridge Cleaver you know? He was a great thinker too, so I wanted to have him sorta’ on the same pedestal. But there's other ideas I had going in to it, like other personal stuff that I’d want them to get out of it you know? The fact that these are two great people, or that they produced great ideas, not necessarily the person, but focusing more on an idea. So I had a text bubble coming out of Eldridge Cleaver’s head and I showed that in gold, like a golden idea, like it’s worth something. And I didn’t have one of Aristotle because it is already assumed. People already assume, like everybody knows that, so I had to imply it with the other guy. But I would want them to get that out of it, that’s how I feel.

Liberator: What's the significance of the bananas on the Fidel joint?

E: The bananas, in Cuba they export a lot of bananas; that's like one of their main things. And in Cuba the price of chicken is expensive. Chicken is like a delicacy. You go over there and they feed you chicken cause you’re a guest. Normally they wouldn’t eat chicken unless it was a holiday, so I added the text “Trade you bananas for chicken.” It’s like satire, cause bananas are cheap for them and over here chicken is cheap for us. We got KFC where you can go and get chicken real fast, so it was like I was trying to create satire, like a joke, but at the same time trying to bring some realities to the forefront; make people take notice of stuff we take for granted, cause everybody can’t just go to KFC and get a chicken wing. It’s something small, but if you can’t get it you can’t get it.

jack and jimi on the subject of race 2000.
acrylic latex airbrush oilpastel, and monoprinting on canvas.
(4.5’x 3’)

Liberator: How do you feel popular culture influences your work?

E: Popular culture has influenced my work a lot. Popular culture and current events. Just the way I take popular culture and try to make popular culture like, mass culture, aware of current events they might overlook. Like everybody knows like, uhh... I know who Jimi Hendrix is. A lot of people know who he is, but at the same time they might not know who the cat next to him is—Jack, a slave from the Congo. Or they might not make the connection with a banjo being played in Africa, to say, a electric guitar played in, say Europe, by some guy born in the US. You know a black guy from the United States, but they might not make that connection. I tried to show a fusion, like a cultural diffusion, with popular culture. You know, different pop icons... like a smurf. I'll take a smurf and have them reinterpreted. Or like, in some of my pieces I'll have the smurf as an antagonist or protagonist you know. They're just going at it, or like going at your mind you know. Like what you think is truth or reality, they're like contradicting it you know, and they're kinda like laughing at you like, “ha you see it this way.” It’s the same thing you thought, but it's like a mirror image you know, like the dynamic opposite, but they're giving it too in a subtle way. A pop icon everybody knows—the smurfs. They're like “yo what does this guy use that for?” Take a step closer and you'll be like oh! You know, they’re kinda like a little guide to draw people in. People are attracted to that kinda stuff because they know what it is. If you use things they're already familiar with they’ll be a little more receptive or at least they’ll give it some attention or some time. It gives you that opportunity to catch people’s attention with popular icons like famous people. I get their attention, then I can say what I got to say, then I can throw some other issue in the arena.

animorphs duel with death over a gallon of spilled milk 1999.
acrylic, airbrush and oilpastel on canvas.

Liberator: So what is your inspiration when you create a piece? Is it to sell it or just to look at it? Why do you do it? What's the point?

E: Kinda. That's just what I do. I'll make some works as public service announcements. Sometimes it’s things that some people might know about if they go to school, but other people might not be aware of, or they might not have ever been introduced to them. Like certain ideas or certain music or certain concepts. If they've never been introduced to it, then they aren’t gonna know about it. Me being introduced to some stuff through going to school and being associated with certain people, I can communicate these ideas to a broader audience you know. Through my work I can make things easier. I can simplify a book in a painting. I have to work through different issues in my life. Like a lot of my work reflects my own search for knowledge. When I find out something new, the way I retain it in my mind is that I'll put it on a canvas. And I can simplify an idea on any piece in my head. So when this issue comes up or this idea comes up I'll reference the painting in my head and I'm like oh!, I know what that means. It’s a way for me to store knowledge, like manuscripts. People wrote manuscripts back in the day, it was like a way to store knowledge and pass knowledge to other people. 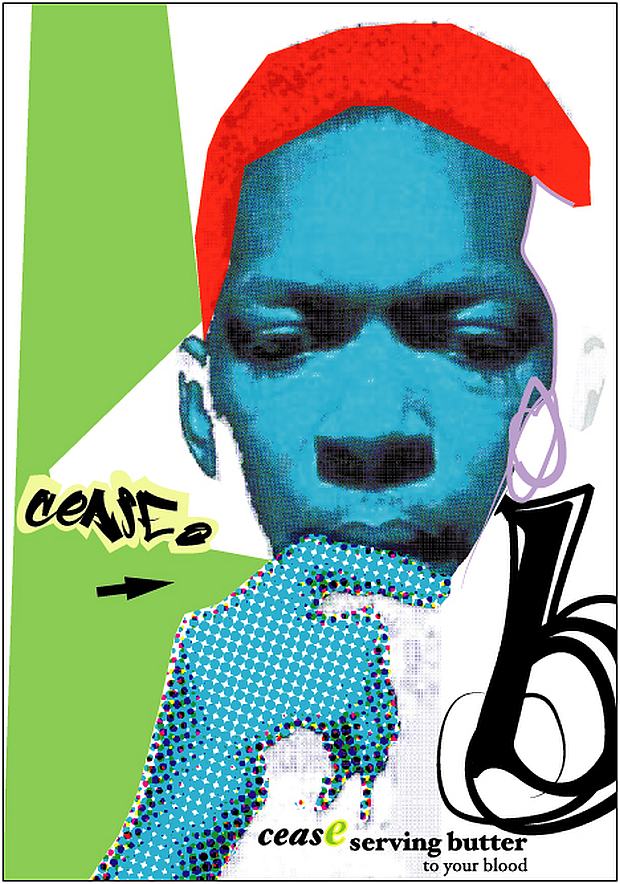 E: I would say a receptive person with an open mind would be able to read my work. It’s definitely geared towards the urban audience, just because of my sensibilities and where I was raised you know. Just me being who I am, my parents, my family, they give me my culture, so automatically I'm gonna give back to my own people and it’s gonna be easier for them to understand what I'm saying because we're speaking the same dialect. We have similar sensibilities, so I think they will be the most receptive to my work. But I attempt to speak to a wide range of people I try to address the world. Its facetious, but I want to address everybody cause there is some stuff people need to know, whether they're here or over there on the other side of the planet, some stuff just needs to be heard. Like everybody don’t have the internet, but if they see one a postcard, a poster, whatever, (overseas posters are everywhere) that this girl blew herself up and they got posters of her everywhere, that’s like a piece of work that’s like art. That’s like a little neo-Virgin Mary. She ain’t even got no baby. She just like how they got em’ with halos and everything else. They do that with all their military heroes too, they turn em’ into saints. But it’s just communication, communicating with everybody. 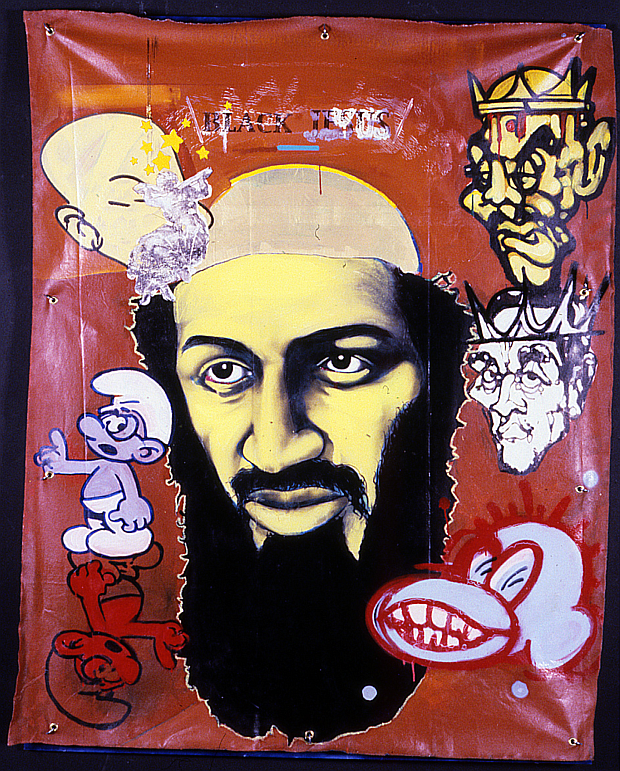 Liberator: As an artist how do you determine your success?

Liberator: Do you have any murals that people could check out over the course of the summer?

E: There's murals over North in Minneapolis. On [the corner of] Glenwood and Emerson, [on] Broadway in back of SuperValu, Penn Avenue, Intermedia Arts [South Minneapolis], inside of Phyllis Wheatly [Community Center], under a bridge somewhere, on top of freight trains, naw... just kiddin’.